2 years on – my post then on Mr. Mandela’s death. Today, here in South Africa there are various commemorations going on, past clips on TV. I thought I’d check out my post from 2 years ago, and am re-posting it today – 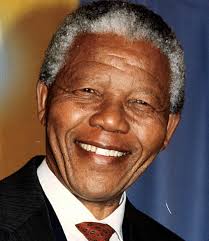 I woke up to the news at 7.00 a.m. this past Friday here in Johannesburg, South Africa. It seems that many had heard the news in different parts of the world before we did. The announcement was officially made some hours after his death at 8.50 p.m on Thursday night.

Did it ‘help’ that we had been expecting his death for a long while now? No, not really. Death is always sudden and shocking – it’s so final –

Friday was wet and cool. I was in my car much of the time; hearing people call in to the radio station expressing their shock and sadness was a release valve for me. I was in tears most of the morning with ongoing pangs somewhere in the region of my heart. I got to the clinic for my afternoon shift just before 1.00 and saw a prominently placed large table inside the clinic with a large head and shoulder framed photograph of Mr. Mandela placed against the wall. There were zillions of small, already burnt candles on the table. Again, that pang – I looked for a lighter but there wasn’t one. The girls at the rooms said that earlier in the morning all the candles were lit and the entire staff of the clinic had gathered around the table singing and swaying. Pat and Lyn said they had never heard anything quite so beautiful or seen anything quite so moving. I can only imagine – plaintive, beautiful singing, chorus, dancing, ululating –

I remember that day on 27th April 1994 when we cast our vote, black and white, voting for a democratic South Africa for which we had fought so long and hard. O such a day of celebration! – those long, long queues from early morning to late at night, walking alongside fellow human beings to cast our votes, the majority of whom had been denied the vote since 1948. Also, such celebration when he was released from prison in February 1990. We came alight and alive. Such a sense of rightness and gladness, a sense of practical freedom at last in the air, each having a vote, breaking from the bonds of apartheid, and separateness. Voting for Mr. Mandela as president of our beloved country. ‘Never’, said he, ‘Never again. Never again will we have one claiming superiority over another ..’ *

I saw former President Thabo Mbeki addressing people at Oxford Road Synagogue last evening wearing a yarmulke, on TV, emphasising the need to remember Mr. Mandela’s life and all that he stood for; and to remember the constitution as the struggle continues for inter alia economic freedom.

The spotlight on him during his lifetime will be on him again as people from all corners of the world come to pay tribute to him and to mourn his passing. 85 current heads of state as I write, 10 past heads of state, royalty, dignitaries, eminences, the famous, celebrities .. …

We celebrate his life at the same time. A beautiful paradox. Or, if not a paradox, most certainly a bringing together of those two seeming contradictions. We mourn the passing of Mr. Nelson Mandela, and celebrate his magnificent life, for which we are in eternal gratitude. As we mourn our loss, so are we celebrating his life. There is a reconciling of those two powerful emotions, coming together in a magical way, uniting our nation. Us, as South Africans. We, as people. It is a shared pain. And a shared remembrance of all that he stood for. Prepared to sacrifice his life no less. There is unity amongst us, of all shades and hues, of all ages, now, as a nation, as we mourn and celebrate.

The world is arriving on our doorstep here in South Africa. It’s already begun. We have MAJOR security issues to attend to. We must deal with all unprecedented, convoluted logistics in a practical way as we are about to experience a particularly large event in history.

Mr. Mandela will be laid to rest on Sunday, at his home in Qunu in the Eastern Cape, the Wild Coast, the Transkei – on the other side of the Kei River. He was born into royalty of the Xhosa clan, of the abaThembu tribe in Mvezo; his father was deposed as chief magistrate when Mr. Mandela was 5 years old, and Qunu became their refuge and home. He had a happy childhood it seems and developed a deep love for the Transkei and its land, people and Nature. Qunu will be descended upon by thousands, including the villagers from that rural area and further afield. There is a memorial service tomorrow at the FNB stadium, more commonly known as Soccer Stadium, in which we hosted the 2010 Soccer World Cup. There will be thousands and thousands of common people, people like me, as well as heads of state and dignitaries and attendant security. I trust we will rise to this monumental practical task of ensuring security and smoothness for all.

Imagine, on the outer level, as an act of homage to our Madiba –

It is not the time for anxiety right now. We have a common purpose in celebrating and mourning and our attention needs to be there. It is a loss, to each of us in some real way, to our country as a collective, to the wider world …

I would imagine that from next week when all have left to return home, and when the dust begins to settle, we will, as South Africans, sigh a collective breath. But when we gather our  breath again, will we continue to honour Madiba and all that he stood for?

We will have to take a deep collective breath of courage when the dust is at least partly settled. We have huge issues ahead. The freedom of the press is under dire threat. As I write, the owner of Sekunjalo Investment Holdings who recently bought Independent News and Media PIC (for a cost of $194 million) has fired the executive editor from The Cape times for reporting on alleged corruption within – just this past Friday. Our public protector Thuli Madonsela is under fire from parliament and the government for her exposure of corruption in the government. We have gantries for road users that have just come into effect about which we are protesting. We have an election looming next year. There is much else that is of great concern. Education is an ongoing worry and a disaster for the masses.

But, for the moment, it is not a time for anxiety about those matters. It will be though, and we will continue the struggle in Mr. Nelson Mandela’s name. It is necessary to make Mr Mandela’s name continue to be an inspiration to us – keep him alive as a symbol of reconciliation.

I hope that we as South Africans, will rise to this, once the dust drops. It won’t be easy. Hopefully, those who have visited from different parts of the globe will also let his name continue to inspire – we are grateful for your outpouring of shared grief and respect.

Hambe Gahle, Madiba. Go well, rest in peace. We will never forget you. We will honour your legacy. Thank you.

* My son met him some years ago at his home in Houghton when his school jazz band performed for him. He was fit and well and my son knows that he was hugely privileged to have Mr. Mandela shake his hand and beam on him. He made this song some years later in honour of Madiba’s birthday last year in July 2012.

The link below is ‘The Kifnness’ recording of ‘Never Again’. http://soundcloud.com/thekiffness/the-kiffness-never-again